Our amazing life in Peru 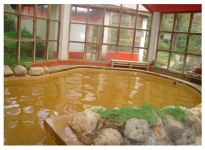 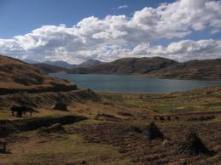 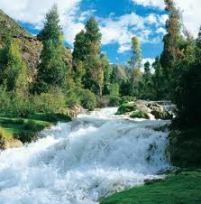 We had a fantastic day this past Sunday.
Although it started a bit slow as my helper Leonnor didn’t show up at the usual 8AM…
An hour later, I called her on her cell, and she spoke very fast, mentioning something about waiting for a taxi (!)
My Spanish is barely fluent, but on the phone it is somehow harder to understand.
I still asked her why she needs a taxi, since I know she lives 2 blocks from me…(I have to admit, I thought she was making excuses). She then explained that she is bringing us the frig’!!
Yes, the one we are buying from her BZ friend.
Sure enough,ten minutes later, she showed up with our new and absolutely necessary addition – our fidg.The cost is $90 for the fridg,(bigger and taller than our American one) $2 to bring it in the taxi and another $4 offered the two guys who graciously brought it to our doorsteps.
We had decided to visit hot mineral pools of Machacancha, as part of doing trips with the kids, this Sunday.
Unfortunately, our two older daughters did not share our enthousiasm at all, after they understood that the water is as dark as cafe au lait!!!
(I, specifically like it, since it makes it more Tsniusdik, I wear a robe which I remove just a second before entering the water!)
Our two sons, DS4 and DS6 were very excited to come with us, as well as DD9!
We happily jumped into a cab to the “departure station” and luckily found there a local man in is fifties, Victor, who offered to take us all the way there for $10.
So hop we went into his nice car/van/pick up and he excitedly made conversation all the way with DH. They really hit it off! Both are “go-getters” and adventurous, and when my DH mentioned about buying a live lamb, in order to make Shchita (ritual slaughter) he gladly went out of his way to look for a sheppard who would be interesting to sell us an animal!
That means that we rode on top of narrow mountains, looking for shepherds and at this point I felt like in a movie!
We actually stopped and got off the car twice.
First, when we saw a lot of action around some cows, as well as announcements made on microphone to a small crowd gathered nearby (near the cows – that is).
At that point, my appetite was getting wet and I cajoled the fantasy of having a freezer full of ribs, steaks and roasts..
To our surprise and disapointment, it was a competition for the most beautiful cow that was taking place, and each cow was carrying a number on her chest.
Needless to say, we asked for the price of a cow, and the beauty was expensive even by American standards!
Well, we reached Machacancha, and to our additional surprise, our dear Victor (we were old friends by then) took all his clothes off and jumped into the water in his red boxer!
He looked very happy to have found these “American tourists”, and he was in a very joyful mood with us.
The kids were immediately comfortable in the water and actually every day since then, DS4 has been asking if we are going to go back to the “dark pool”. (Yes, we are!!)
The way back was again up and down narrow ways carved in mountains and the beautiful scenery was only disturbed by our two sons asking repetitively if we are going to get animals. By then they placed their orders of cows, lambs, and even chickens and roosters. These two cuties thought that all this company was somehow going to fit into the back of Victor’s pick-up!
The unbelievable landscape was somehow taking my mind away from the awkward driving conditions, up and down narrow paths and sometimes even kind of – well – a dangerous ride. At a certain point, persevering Victor decided to go uphill and find maybe another shepherd who might want to sell us one of his flock, (this guy never gives up!!) but not to avail, he decided to make a U turn. The only inconvenience was that there was barely enough room to do so, and also, by the way, we were on a narrow dust road some 3.500 feet high. That was a bit too much for me and in a sheer moment of mother’s instinct, I unbuckled my kids seat belts and told Victor that we need to stretch ou legs for a few minutes. We jumped for our lives, although I tried to hide my overwhelming feeling of terror from my little ones, to prevent if possible, any consequence of future anxiety disorders or even panick attacks!
Victor managed quite alright I would say, as the real “mountain man” that he is. I got to observe him later on, climbing up a hill within seconds, demonstrating an amazing agility and flexibility.
Back in the car and still driving thru the mountains, the smell of eucalyptus was both delightful and invigorating. As I mentioned my thoughts to Victor, he immediately stopped the car and ordered my husband to pick several branches. Still fasten in his seat belt, all DH had to do was extend his hand and pick. At that point I thought of drive thru services in the US, such as ATM and the likes and I thought that this “drive thru Eucalyptus” is definitely my favorite branch service!
DH and Victor became even more friendly another hour later, after having heard all of his life including his recipes for eucalyptus tea (“a savor of Eden” he claimed) and his description of the various potatoes and what to cook them with, each one respectively.
The way home was safe – Thank you God!  And after paying our dear Victor 120 soles for this special day (about 34 dollars), we exchanged phone numbers and promised to stay in touch and go on future Sunday trips together!

This entry was posted on September 19, 2011 by positivenergy11. It was filed under Uncategorized .